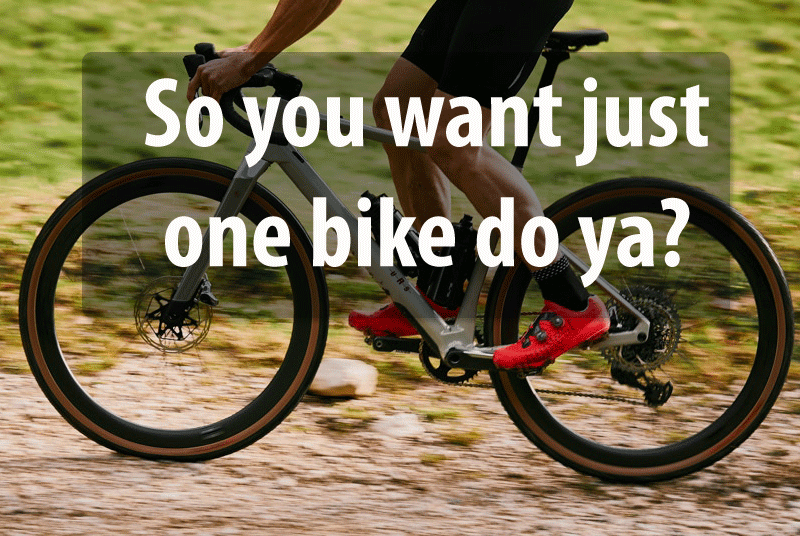 
“If I buy just one bike, what should I get”


I’ve been asked this question a lot over the years. Almost as many times as “what brand is the best” and “who has the best deal”. I’ll answer these two questions in a future article.

The bike industry is always trying to get you to buy another bike. We create “niche trends” almost at will, with the simple goal of getting you, the consumer, buying another bike. After a while though you have a garage full of bikes you don’t ride and keeping that many bikes running is a pain, not to mention expensive and time consuming. The idea here is to ride right? Not spend time figuring out which bike to ride.

I have a ton of bikes. Not even sure how many. I have road bikes for winter, road bikes for summer, and a road bike for mountain climbs. I have a hard tail and couple of gravel bikes and even a fatty. I have to agree it is just too much.

I’ve taken a survey of long time riders to find out what bike is their favorite if they had only one bike. Most of us are long time roadies so my views are aligned with mostly road use. If you are strictly a mountain bike guy, I apologize but have you ever tried to do a casual day ride somewhere around town on your mountain rig? Ick.

Gravel bikes are the sweet spot right now. A lot of road tech goes into gravel bikes so they are lighter and faster but also a bit of mountain tech goes into them, and they work for a variety of conditions both on road and off. No other bike is really as versatile.

Gravel bikes started as “cross” bikes years ago. In the 80’s I put together cross bikes for customers. Cross is simply a bunch of leg shaving roadies hopping on and off their bikes in the muddy fall weather. It is completely a road sport with its heritage really going back to Belgium, with bad weather and worse roads. A bunch of spandex wearing roadies used cross as an excuse to keep riding in the fall before the real crummy weather came in and honestly it is a fun sport, if you like getting on and off your bike and I actually don’t like that part. But it is done on a fairly short circuit so good spectator sport. Grab a IPA and go and watch bike folks get muddy. The industry loved these things simply because we could sell a bunch more stuff to roadies and extend the shop’s selling season. In the early days typically you would take an older road bike and throw bigger tires on it and pretty much now a cross bike. I would keep old chainrings around to create a “1x with chainguards”. It was fun and pretty cheap but soon started to morph into its own expensive, exclusive thing. 100 dollar tires followed carbon frames into the world championships and we starting stuffing it down the consumers throats.

Nowadays we have coined the term “gravel bike” as the latest offshoot of the cross bike. It is no longer race ready nor is a rider required to shave his/her legs to own one. They are great all around bikes for commuting, touring, road riding, and even mountain biking. Mechanically they are simpler than road bikes and mountain bikes. Tires last longer and annual maintenance is less. What’s not to like other than going a little slower on the road and maybe staying off the gnarly trails with the thing.

This website uses cookies to improve your experience while you navigate through the website. Out of these cookies, the cookies that are categorized as necessary are stored on your browser as they are essential for the working of basic functionalities of the website. We also use third-party cookies that help us analyze and understand how you use this website. These cookies will be stored in your browser only with your consent. You also have the option to opt-out of these cookies. But opting out of some of these cookies may have an effect on your browsing experience.
Necessary Always Enabled
Necessary cookies are absolutely essential for the website to function properly. This category only includes cookies that ensures basic functionalities and security features of the website. These cookies do not store any personal information.
Non-necessary
Any cookies that may not be particularly necessary for the website to function and is used specifically to collect user personal data via analytics, ads, other embedded contents are termed as non-necessary cookies. It is mandatory to procure user consent prior to running these cookies on your website.
SAVE & ACCEPT
× product(s) added to cart → ×
0
PageLines