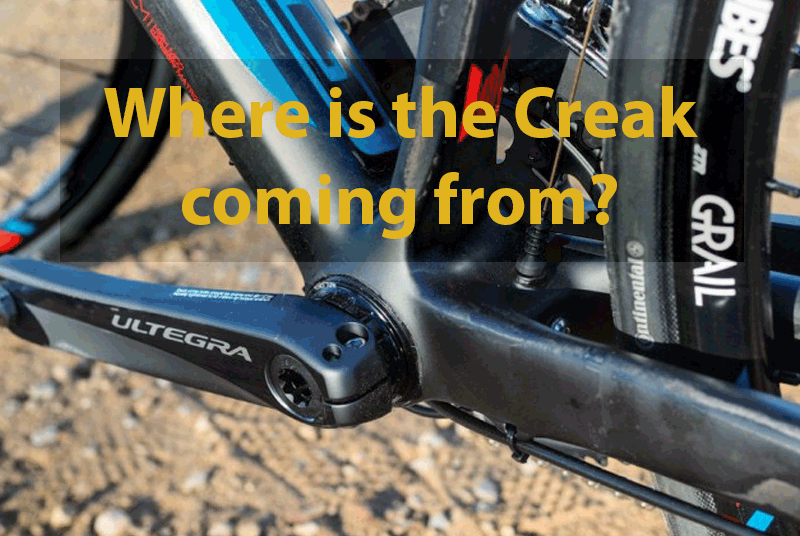 
Where is the Creak coming from?


Noisy bikes drive me crazy. I’ve told people in group rides I wouldn’t ride with them again until they fix their creaky squeaky bikes. I make bike parts for a living and after millions and millions of parts produced, all to replace a worn out something, I have zero tolerance for creaky stuff. Fix your bike and keep it fixed I say.

Creaks aren’t easy to diagnose. Just because it seems a noise is coming from somewhere on the bike doesn’t mean it is coming from there at all. Noises resonate throughout bikes, especially with newer carbon fiber frames. Fiber acts like a bullhorn for noises.

When looking for the source of a creak, consider the following common areas:

This website uses cookies to improve your experience while you navigate through the website. Out of these cookies, the cookies that are categorized as necessary are stored on your browser as they are essential for the working of basic functionalities of the website. We also use third-party cookies that help us analyze and understand how you use this website. These cookies will be stored in your browser only with your consent. You also have the option to opt-out of these cookies. But opting out of some of these cookies may have an effect on your browsing experience.
Necessary Always Enabled
Necessary cookies are absolutely essential for the website to function properly. This category only includes cookies that ensures basic functionalities and security features of the website. These cookies do not store any personal information.
Non-necessary
Any cookies that may not be particularly necessary for the website to function and is used specifically to collect user personal data via analytics, ads, other embedded contents are termed as non-necessary cookies. It is mandatory to procure user consent prior to running these cookies on your website.
SAVE & ACCEPT
× product(s) added to cart → ×
0
PageLines